Posted by ZUMAPRESS.com on March 9, 2018
Posted in: ZUMALAND. Leave a comment 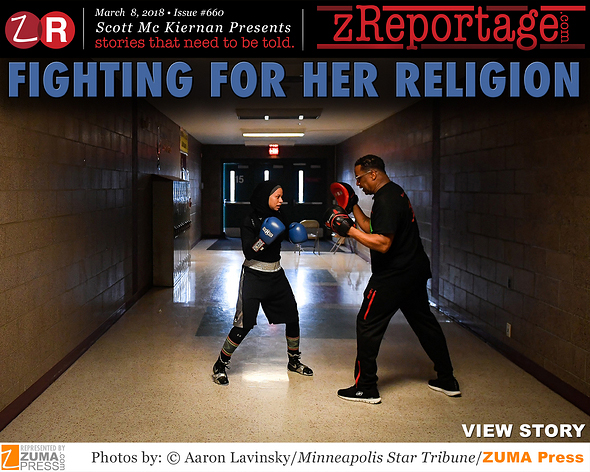 Amaiya Zafar stepped into a boxing ring in Iowa amid little fanfare in late May, 2017. She felt relaxed, confident. A teenager happy to be competing in a sport she loves. She won a three-round fight by decision, improving her career record to 1-1. “The second fight I could showcase my skills better,” she said. “That’s how I’ll actually look when I fight.” Her debut fight was a blur of emotions, an event that attracted national headlines, a horde of news media and raucous supporters that screamed so loudly that Zafar could not hear instructions from her corner. Zafar, a 17-year-old Muslim from Oakdale, finally prevailed in a two-year dispute with USA Boxing and made history by becoming the first fighter to wear a hijab, long sleeves and leggings in a sanctioned bout. She lost her fight but scored a larger victory by opening doors for other Muslims in the United States to compete in sanctioned matches by receiving a religious exemption waiver.