ZUMA Press Launches this week: “Yemen On the Brink”. Photography by © Mohammed Mohammed/Xinhua via ZUMA Press.

Posted by ZUMAPRESS.com on November 7, 2018
Posted in: ZUMALAND. Leave a comment 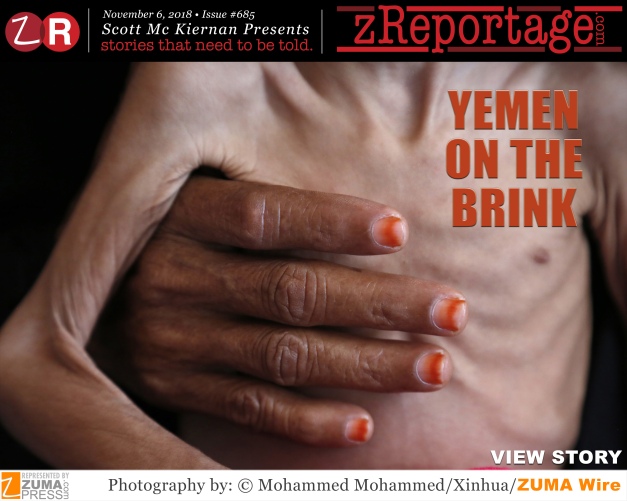 The number of people facing starvation in Yemen could rise to nearly 12 million as conflict intensifies around the port of Hodeidah, a vital aid delivery link, according to the World Food Program. A collapsing currency and deteriorating economic situation in the Middle East’s poorest country are also aggravating the situation. 18 million people in Yemen already do not know where their next meal is coming from and eight million of those are ‘considered on the brink of famine.’ Yemenis are starving because of war. No natural disaster is responsible. No amount of humanitarian aid can solve the underlying problem. Without an immediate, significant course change, portions of the country, under the watch of the UN Security Council, will likely tip into famine. UNICEF reports that 460,000 children suffer from severe acute malnutrition. Avoiding famine, if this is still possible, requires the Saudi Arabia-led coalition, supporting the government of President Abed Rabbo Mansour Hadi against Houthi rebels and fighters aligned with former President Ali Abdullah Saleh, to halt what promises to be a bloody battle for Yemen’s most important port, Hodeida. Yemenis need a ceasefire and a durable political settlement to have a chance at rebuilding the shattered economy. By numbers, Yemen is suffering from the largest food crisis in the world. According to the UN, an estimated seventeen million persons, 60 per cent of the population and three million more than were so afflicted at the start of the year, are food insecure and require urgent humanitarian assistance to save lives. Seven of the country’s 22 governorates are at a phase four emergency food insecurity level, one step away from phase five: famine.