ZUMA Press Launches this week: zReportage: “All That IS Broken”. Photography by Monica Herndon/Tampa Bay Times

Posted by ZUMAPRESS.com on January 16, 2019
Posted in: ZUMALAND. Leave a comment 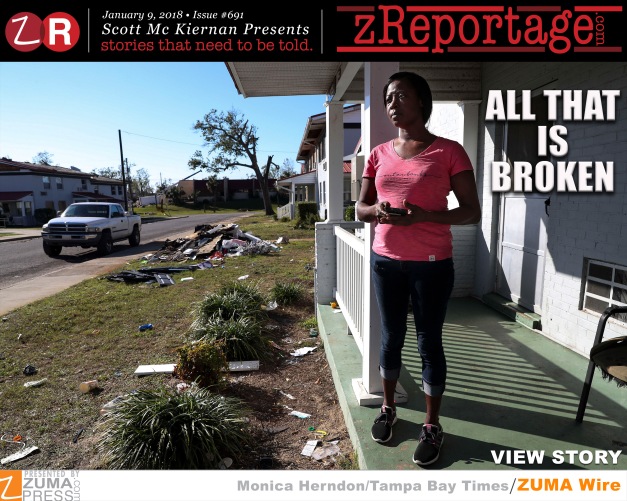 Hurricane Michael After 2 Months by Monica Herndon/Tampa Bay Times for ZUMA Press: STORY SYNOPSIS In ruins, Panama City faces all that is broken two months after Hurricane Michael. Michael struck the Florida panhandle as a category 4 storm over two months ago. Panama City and the surrounding areas are still reeling. The storm left 90 percent of structures damaged or destroyed and FEMA estimates that it produced 25 million cubic yards of debris. For comparison, Hurricane Irma produced only 2 million cubic yards of debris. Only 40 FEMA trailers have so far been erected, although about 1,500 have been approved in areas hit by the storm. Two regional hospitals remain largely shuttered and nursing homes and rehab centers closed. With half the schools damaged, students share campuses on split schedules, with the youngest start as early as 6 a.m. Cable and internet service is still mostly down.