ZUMA Press Launches this week: zReportage: “Harvesting The Ends of The Earth” by Simone Francescangeli.

Posted by ZUMAPRESS.com on December 13, 2019
Posted in: ZUMALAND. Leave a comment 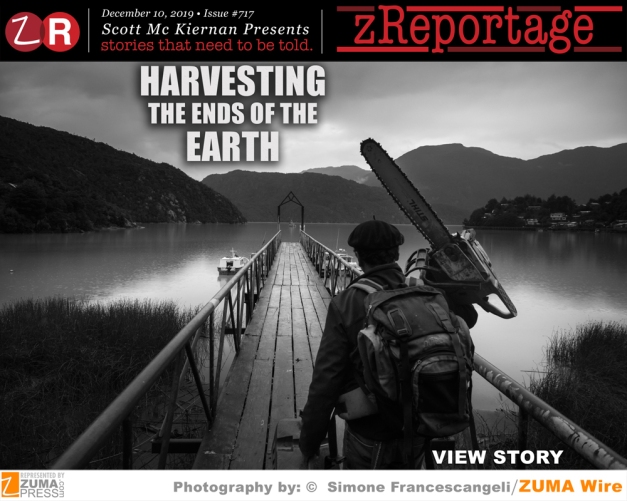 The Chilean government announced plans to roll out a $5.5 billion economic recovery plan after rioting and protests triggered the worst monthly contraction in a decade, and crippling the countries economy. In the current scenario of the Chilean economic crisis, the southern austral regions represent a historical and coherent example of the country’s problems. These are areas are scarcely inhabited, displaying a harsh landscape with vast forest areas, often beaten by the cold antarctic winds. These natural resources have always been themselves the subjects of economic speculations. The Chilean woodcutters in the community of Caleta Tortel, in the south of the Aysen region, endure daily hardships of survival which are compounded with bad weather and lack of resources in this remote and isolated area. Tortel is located several hundred kilometers from the regional capital Coyaique and was once only accessible by the waters of the Rio Baker and the Pacific Ocean. Chile is one of the world’s leading producers and exporters of wood and wood pulp. Cutting and collecting logs has always been entrusted to individual lumberjacks. The artisanal nature of the activity and the harsh climate contribute to making the living conditions of workers and their families more difficult. The Cypress trees of Guaiateca are widespread in this region, a tree with flexible wood, very resistant to water and with highly flammable resins. The cutting of this tree is allowed by law only from the moment when the trunk is no longer green or considered dead. The chainsaw is the primary tool for the production of logs for both sales and home heating. Arriving only at the end of the 80s, however, chainsaws have not yet completely replaced the manual skill of the axe. In recent years, the difficulties have been amplified by the fall in sales prices due mainly to the development of mass tree extraction companies working in the more easily accessible areas (not least the Amazon region). And following decades of intensive forest cutting and clearing, the Chilean woodcutters today have to push themselves into an even more remote area regions, like the small islands of the southern fjords. To achieve a sufficiently profitable amount of timber the loggers work alone with their own chainsaws for up to fourteen consecutive hours, spending entire days in the rain or in the cold, away from their families.